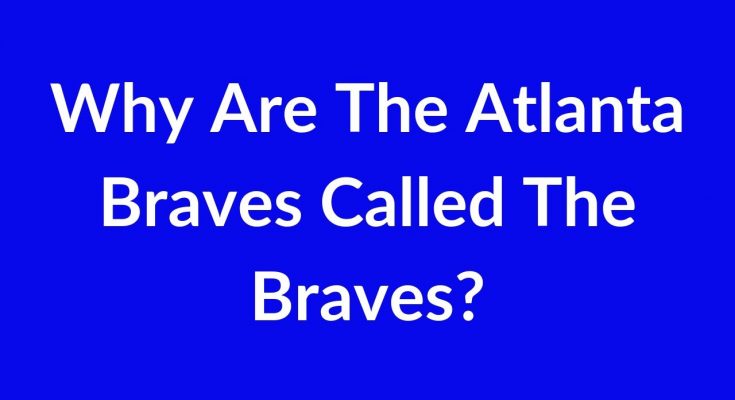 Why Are The Atlanta Braves Called The Braves?

I have been an Atlanta Braves Fan since 1974.  As I think back over the years, I never knew why the Braves were named the Braves!  Since I did not know the answer, I decided to do some research!

In this article I want to answer these questions!  Why Are The Atlanta Braves Called The Braves?  I also will give a brief history of the Braves Organization!

Why are the Atlanta Braves called the Braves?

The name “Braves” has its origin from a word for a Native American Warrior.  According to Wikipedia, James Gaffney became the President of the team was a member of the New York City’s political society Tammany Hall, which used as their symbol an Indian chief.  The society adopted an Indian headdress as its emblem and its members became known as the Braves.

When was the first time they were called the Braves?

In 1912 was the first time this franchise was called the Braves.  The complete name at this time was the Boston Braves!

Brief History of The Braves Organization!

Names of the franchise over the years:

The beginning of the Boston Red Stockings franchise!

According to the Braves website, the Boston Red Stockings became incorporated on January 20, 1871.

Then in March, 1871 the Boston Red Stockings became a part of the National Association of Professional Baseball Players!

In 1876 the team changed their name to Boston Red Caps.  They also became a charter member of the National League.

The first game of the National League was played on April 22, 1876.  In this baseball game the Boston Red Caps defeated the Philadelphia Athletics by a score of 6-5!

Once again Boston changed their name to Boston Beaneaters in 1883.  They were known as the Beaneaters from 1883-1906!

Boston’s nickname changed once again to the Doves in 1907 and to the Rustlers in 1911!

Then in 1912 their name became the Boston Braves.  As stated earlier in this article, The name “Braves” has its origin from a word for a Native American Warrior.

Why Are The Atlanta Braves Called The Braves?

According to Wikipedia, James Gaffney became the President of the team was a member of the New York City’s political society Tammany Hall, which used as their symbol an Indian chief.

The society adopted an Indian headdress as its emblem and its members became known as the Braves.

Then in 1936 the team became known as the Boston Bees.

In 1941 they changed their name back to the Boston Braves.

Because of low attendance from the fans, the Boston Braves moved to Milwaukee, Wisconsin!  In 1953 the now Milwaukee Braves finished the season with a 92-62 record!

In the 1950’s the Milwaukee Braves had some very impressive teams.  Such power hitters as Hank Aaron and Eddie Mathews led the offense for the Braves!

They also had great pitching stars such as Warren Spahn and Lew Burdette.  During their time in Milwaukee, the Braves won two pennants (1957 and 1958).  They won one world series in 1957!

In 1966 the Milwaukee Braves moved to Atlanta, Georgia.

During the 1970’s the Atlanta Braves pretty much had a drought for victories.  The most exciting part of the early 1970’s was the chase by Hank Aaron to pass Babe Ruth for the home-run title!

In 1976 Ted Turner owner of superstation WTBS bought the team and started airing Braves games on his television station!  The Atlanta Braves became known a “America’s Team” because they could be seen on his cable Television station around the country!

Once again the Atlanta Braves did not have any good teams.  I should know I would watch the games on tv when I was growing up in Athens, Alabama.

In 1982 Ted Turner hired Joe Torre to become the Braves manager.  The Atlanta Braves were led by superstar Dale Murphy and Bob Horner.  Their star pitcher was veteran and future hall of fame pitcher Phil Niekro!

In 1982 they won their first division championship since 1969!  Then they lost to the St. Louis Cardinals in the championship series!

In the middle of the 1990 season, Bobby Cox returned to be manager of the Atlanta Braves.  Before becoming the manager, Bobby Cox was the general manager.  Cox was preparing the Braves farm system with talent that would provide the Braves with superstar talent for years to come!

The team of the 90’s had so many superstars.  Some of the offensive hitters were future hall of fame third basemen Chipper Jones.  Others include Ron Gant, David Justice, Terry Pendleton, Sid Bream, Fred McGriff, Andruw Jones, Mark Lemke just to name a few!

After the 2005 season the Atlanta Braves has their ups and downs.  In 2010 the Braves made the playoffs for the first time since 2005.

The 2010 season was Bobby Cox’s last year as the Braves manager.

Chipper Jones last year was in 2012.  The Braves played in the first ever Wild Card Game against the St. Louis Cardinals.  That game the Braves lost on the famous “infield fly” call by umpire Sam Holbrook which was actually in the outfield!

The next year the Braves won the national league east.  They lost to the Los Angles Dodgers in the division series.

The rebuilding years were very rough for Braves country but was well worth it!

Here are some of the stars from the 2018 season:

The future looks bright for The Atlanta Braves!

At the time of writing this article, The Atlanta Braves owner is Liberty Media.  Brian Snitker is the manager of the Braves and Alex Anthopoulos is the general manager!

The Atlanta Braves play their home games at SunTrust Park!

I hope that you have enjoyed this article Why Are The Atlanta Braves Called The Braves?