This was the first time that former Brave Freddie Freeman was able to see his former teammates since the World Series Parade Back In Atlanta!

Here are some comments that Freddie Freeman said while answering questions from media in the dugout before the game on Monday Night!

Here is a tear jerker interview that Braves Dugout Reporter Kelly Crull had with Freddie Freeman before the game!

“I love Braves Country and always will.”

Freddie Freeman tears up when talking to @Kelly_Crull about his memories of playing in Atlanta. pic.twitter.com/VitWFb6f8o

In the first game of a three game series, The Atlanta Braves played The Los Angeles Dodgers.

This game was played at Dodger Stadium in Los Angeles, California.

Here are the starting pitchers for the game between the Braves and Dodgers!

The starting pitcher for The Atlanta Braves is Huascar Ynoa.

For The Los Angeles Dodgers the starting pitcher is Clayton Kershaw.

Here is the Game Summary for the game between the Braves and Dodgers!

In the bottom of the 1st inning, Freddie Freeman with one out hits an opposite field solo homerun to give the Dodgers a 1-0 lead! This was Freeman first homerun of the season!

You can’t make this up. @FreddieFreeman5 just homered in his first at-bat against the Braves. 😱 pic.twitter.com/twwqlmghvq

In the bottom of the 4th inning, The Dodgers began adding on to their 1-0 lead. With runners on 1st and 3rd, Cody Bellinger grounds out to 1st basemen Matt Olson allowing Justin Turner to score from 3rd base. Dodgers lead The Braves 2-0!

With a runner on 2nd, Edwin Rios singles to right field to bring in Will Smith to score from 2nd base. Dodgers lead The Braves 3-0!

Freddie Freeman faces Newcomb and issues a walk to load the bases. The next batter is Trea Turner who hits a double to left field to score all three runners! The Dodgers extend their lead to 6-0 over the Braves!

In the top of the 5th inning, Guillermo Heredia hits a solo homerun over the left field wall for the Braves first run of the game! Dodgers lead the Braves 6-1!

GET THE SWORDS ⚔️

In the top of the 6th inning, Ozzie Albies hits his 5th homerun of the season to make the score Dodgers 6 Braves 2!

Then with runners on 2nd and 3rd, Adam Duvall grounds out to shortstop Trea Turner which scores Matt Olson from 3rd base. Dodgers lead the Braves 6-3!

Then in the bottom of the 8th inning, Dodgers Cody Bellinger hits a solo homerun over the centerfield wall off of Braves reliever Jackson Stephens to give the Dodgers a 7-4 lead!

Then in the top of the 9th inning, Dodgers closer Craig Kimbrel comes in to pick up his 3rd save of the year! The Los Angeles Dodgers defeat The Atlanta Braves by the score of 7-4!

Here is the Final Totals for the game!

The winning pitcher for the Los Angeles Dodgers was Clayton Kershaw who improved his record to 2-0 on the season!

The losing pitcher for the Atlanta Braves was Huascar Ynoa who has a record of 0-2 for the season!

Los Angeles Dodgers closer Craig Kimbrel picks up his 3rd save for the season!

Atlanta Braves 1st Basemen Matt Olson continues his hot streak by going 3 for 4 with a double!

Here are some comments made after the game!

Completely wrong on this one. Snit said he liked the progress Ynoa made tonight. He was primarily talking about mound presence. I think the whiff rate and exit velo told a different story, especially the second time through the lineup. https://t.co/NQVPSz79OV 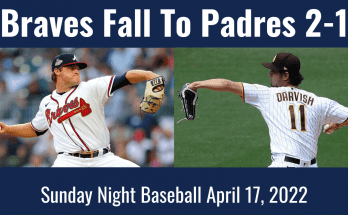 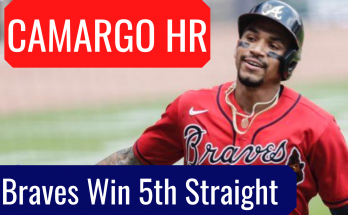