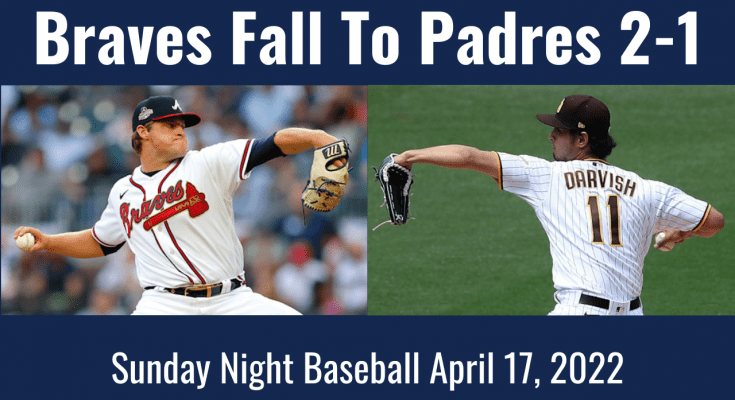 The Atlanta Braves Fall To The San Diego Padres By A Score Of 2-1! With This Win The Padres Tied The Series At 2-2! Matt Olson Continued His Hot Streak With 2 Hits!

This game was played in San Diego, California at Petco Park. The game was televised nationally on ESPN!

Bryce Elder made his 2nd career start for The Atlanta Braves!  Elder ran into early trouble in the first two innings due to walks!  He pitched 4 1/3 innings while giving up 2 runs on 3 hits while walking 5 and striking out 5 batters while throwing 89 pitches!  Elder was the losing pitcher.  His record goes to 1-1 on the season!

Yu Darvish was the starting pitcher for The San Diego Padres!  Darvish pitched an excellent ballgame to claim his first win of the season!  His only blemish was a solo homerun by Marcell Ozuna in the seventh inning.  Darvish pitched 6 2/3 innings while giving up 1 run on 4 hits and striking out 8 batters while throwing 96 pitches!  His record goes to 1-1 on the season!

Matt Olson continued his hot streak at the plate!  Olson went 2 for 4 with a double!  He has a .421 batting average, an on base percentage of .551 and an OPS of 1.235!  What a great start for the 1st baseman for The Atlanta Braves!

Gear up for the next Atlanta Braves game with this Matt Olson Name and Number T-shirt from Nike. Its lightweight cotton fabric is breathable and comfortable, perfect for the midsummer heat of baseball season. The front and back are decked out in detailed Matt Olson graphics that will highlight your admiration of one of the game’s best players.

Marcell Ozuna scored the only run for The Atlanta Braves when he hit a solo homerun in the top of the 7th inning! 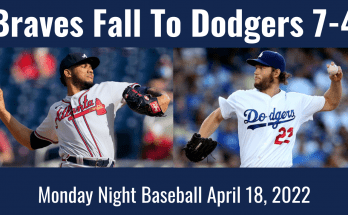 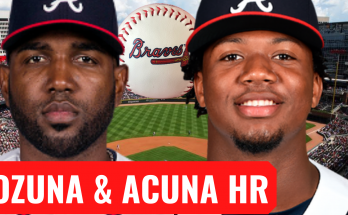